Andrew Day (ANDRZEJKI, also known as Jędrzejki or Jędrzejówki ) – polish divination evening celebrated on the night of 29 to 30 November, in the the eve of the holy Andrew, the patron of saint of Scotland, Greece and Russia. The first Polish literature mention of it appeared in 1557 thanks to writer Marcin Bielski. This day happen at the end or at the    beginning of the liturgical year. Andrew is a special occasion to play before advent.

Once divination in St. Andrew day had been purely matrimonial and special only for unmarried girls (male version of Andriew’s were KATARZYNKI- Katherin’s day ). Initially, St. Andrew’s divinations were treated very seriously, and just celebrated individually , in isolation , later ages took the form of collective organized peer into single maidens (on the release=for marriage) futures, and recently transformed into a casual fun that brings together young people of both sexes . 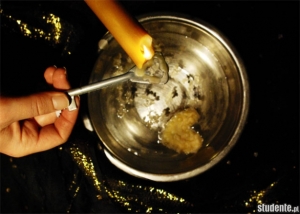 The most popular is , of course, wax divination. For all the fun you need a bowl of water , a key with a large hole and wax candles . The wax poured through the hole into the bowl will work-take shape of some form. Wait until it dries and take out it from the water . Light the lamp and cast the light on the wall. Keep your wax so that the wall show shadow . Try to guess what it means for you? Maybe it took some form of animal or thing ? This is your exact divination.

On paper or cartoon you need to draw two large hearts and cut them out. The paper must be rigid, so then it won’t torn. Paint the heart in red. At one write side write the names of the girls as, as much as possible, new, old ,foreign, of your friends. At the other side write the names of the boys. During the divination we use pin. Girls are showed with the other side of heart. We keep our heart in the air, the person face inscriptions of the opposite gender and put a pin into it. Other person is reading, which name she/he pierced on the other side. The hit name is the name of a future wife or husband.

Playing with shoes is very funny. Each participant takes off her left shoe. Shoes need to be set in the straight line, from opposite wall to the door. Shoes have to touch at the tips and heels to each other. When the amount of shoes run out, transfer these from the end to the beginning in such a way that the line is moving forward. The owner of this shoe, which was the first to reach through the door will be fastest of all in getting married. 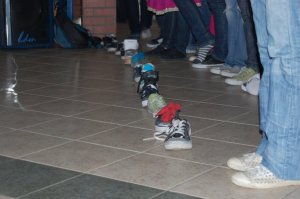 You need to prepare a drink which has leaves or the grounds. Every girl or man should not drink to the very end – tea or coffee must easily cover the grounds. You have to put a cup into your left hand and do three spins in the opposite direction to clockwise. Now you just put the cup on the saucer upside down. It is good to put on a saucer before a small, disposable napkin , which protect against possible flooding of the table. Now you are studying the shape in which grounds arranged themselves and read the future. Of course, often the possibilities are endless, certainly everyone sees something different, so the interpretations may vary, however you can interpret them as:

Enjoy your time with friends over whole of the night, use tarot cards if you can and prepare potions. You won’t be disappointed 😀